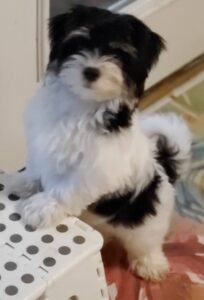 Mr. Peppers is now 7 months old, and still running on all 4 cylinders.   After getting so frustrated with his out-of-control behavior, I was considering putting him up on e-bay for the highest bidder.  I decided to call Judy Bower, his breeder and ask her opinion.  “Oh,” she said, “this is a classic case of ‘I AM Alpha Dog’ and you are my ‘Sub Servant’!  She then proceeds to tell me to put him on a leash and hook him to my waist.  So, I did.  He went everywhere with me.  At the counter while I was cooking, at the sink while I was washing the dishes, following the broom while I swept the floor, and walking the trash out to the trash container.

He would look up to me as to say, “Please release me.”  After the first day, I began to work with him and training him to “sit” and then to “come.”  It was one-on-one at least 1-2 hours a day.  When he refused to comply, I got out the leash again and hooked him up to my waist.

This was 2 months ago, and I am happy to report that Mr. Peppers has come a long way.  He must ‘sit’ before eating, and he sometimes still barks at me while sitting. It pains him so to obey.  We also “pray” for our food, so he gets very frustrated to have to “sit” while I pray.  He as learned that when I say “amen,” it is his cue to get to come eat.  I can finally say that we have conquered the ‘sit’ and ‘pray’ routine.

Another event that took place was when he became a “eunuch” 2 weeks ago.  He detested the “cone-of-shame,” but we noticed that he had to be more dependent on us for the duration.  He became much more loving, and when we called his name, he would come without much coaxing.  I can say he even loves being “cuddled.”

We practice tricks with treats, and he does know how to select his “doggie” from his “sleepy bear.”  He still has not learned to roll over, but in time, I think he will catch the idea.  One thing we have learned… this breed needs a lot of attention.  And he craves attention!  He is extremely intelligent, and he is learning more and more every day.  I have finally reached “Alpha Dog” status.   And, if for one moment he wants to take back the role, I get out the leash and we become “buddies” once again.  Mr. Peppers, you are a darling, even if you do not know it yet!