The other day, thinking about what to make for supper, I happened upon country style ribs looking up at me from the meat case at my local grocery store.  Now, just what could I do with these, I thought.  They looked so meaty and regal, that before I knew it, they were in my grocery cart.  On the way home I kept thinking about those country style ribs, and I could clearly remember my mother cutting them up and putting them in her Italian Sunday Red Sauce.   I also thought how good they might be in my Farmer’s Cabbage dish where I cook them up with fresh vegetables and cabbage.  Bill would love this dish, and he would savor it for 3 days straight.  It would certainly be the safe way to go…but then who wants the same old humdrum?

Barbecue instantly entered my mind, but with the windy day and low temps, how could I ask Bill to step out and fire up the grill?  Of course he could throw on his coat and duck in and out, but I just couldn’t bring myself to plead. After pondering a minute or two, there was only one way to go…braising, and then baking.   Let’s try it!   You know, I talk to myself, and the argument was pretty convincing.

I must tell you that a total of two hours later, the most heavenly braised and barbecued ribs were on the plate.  And, believe it or not, we could even smell the smoke!  It happened when I opened the oven, and the mesquite aroma filled the air.  Bill, and Cappuccino, my Shih Tzu, both came running from the back of the house into the kitchen.  “Hey, are you barbecuing?” he said.  “Well, yes and no,” I replied.  “I guess you will just have to see for yourself.”  They both pulled up a chair, or shall I say, Bill pulled up a chair, and Capps just perched himself right in front of the stove.   If these ribs tasted anything like they smelled, this would definitely be a hit.

The ribs were big and meaty, and even though I only intended to eat half of one of the ribs, the other half was gone unashamedly. Bill was savoring every bite, and I even set aside a very small portion, (no barbecue sauce) for Capps.

So, please look for the picture and the recipe.  This is one recipe you will just have to experience.  It may be your best, “in house” barbecue. 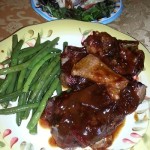