My Husband, My Valentine 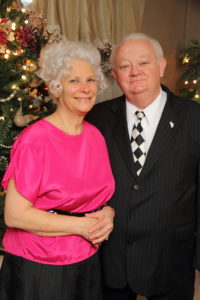 Every Valentine’s day, I wonder what my husband Bill will do that he hasn’t done before.  We were teenagers when we met, and I can honestly say, from that young age until now, some 55 years later, he always seems to come up with a “surprise.”  Back then, he didn’t have a lot of money, so I can remember the wildflowers he picked along the way while walking to school.  He was 17 and I was 16.  I would find them in my locker, with a box of candy and a “love note.”

I really had no intention of marrying him, but with the continuous barrage of gifts, cards, sweet notes, and flowers, I found myself giving second thoughts to the notion.  Everyday was a love day to him, but especially on Valentines.  There was one incident that I recall when he left me totally red faced.   We were out to dinner, and he breaks out in song.  It was the beautiful Nat King Cole song; “When I Fall in Love”.  His voice was always heart grabbing, and I’m sure everyone around me was delighted.

Then there was the 3-foot heart sign that he made. He surrounded it with white Christmas lights, and erected it in the front yard.  It read, “I Love Rosalie.”  People were tooting their horns while driving up and down the highway in praise of his declaration.

He is not only a hopeless romantic, but at times very funny.  Once, when the children were little, we got into a reckless spat.  We were both standing our ground on this disagreement.  He left the house for a while, while I was working on the laundry in the basement. I was determined not to speak to him for the rest of the day.  I am not sure how he managed, but he was able to sneak in 6 rose bushes.  He had placed one in every room, then called me up as though there was a catastrophe going on.  He said,” Rosalie, someone’s come and left you your favorite flower.”  Going from room to room, I couldn’t help but to start laughing.  He twirled me around, and said, “You had better go find your shovel.”

There have been some rocky days over the 55 years, but I must say this teenage romance has endured.  I realize I have the best of the bargain, and for that I am thankful.  If you have an opposite mate, maybe one that doesn’t always remember dates, but loves you dearly, thank God for his commitment, and for the love you both have for one another.

To Bill, I say…what’s next?  And to my Husband, my

Valentine, I say, thank you for a lifetime of romance.

Home > Blog > My Husband, My Valentine