Today I am introducing our new puppy, “Mr. Peppers.”  He is a 14-week old registered Havenese.  As you can see, he is a black and white pile of fluff that never stops moving, save the two naps he takes a day.  He also mercifully sleeps through the night.  He runs laps around the couch, chews on cords, tablecloths, socks, and tears up paper napkins.  He chews on anything that will fit in his teeny little mouth.

It has been a long time since puppyhood, especially with “Cappuccino,” our Shih Tzu, reaching the age of 14 years old a few weeks back.  “Capps” has always been our faithful little buddy, never leaving our sight, playful, but never biting.  Adapting to car rides, strange people and dogs of all sorts.  Seldom protests about new ideas, and easy to teach most anything.

But the last few years have taken their toll, and Capps is mostly blind, hard of hearing and sleeping more and more.  Hence, we thought a new puppy just might be the trick to revive Capps before “heading to the light.”

However, nothing could be further from the truth.  Capps does not like this puppy.  PERIOD!  He says…” Get out of MY chair, don’t lay in MY bed, don’t play with MY toys.”  All the while looking at me and Bill and saying, “Who brought him here, anyway?” People tell me to be patient; that Capps will eventually give in, maybe give a tolerant look at least.  We are still waiting.

Back to Mr. Peppers.  Personality is his middle name.  He watches us with his little eyes, follows us everywhere, nips at our heels, and barks when ignored.  He figures out how to get through the tiniest of places, makes an opening where there was none, and never gives up begging us to romp, run, play, and heed is immediate attention.

We have concluded:  This puppy was not meant to revive Capps, but rather to revive the two old people that live here.  Perhaps he will ward off arthritis, stiffness, heart failure and a host of things.  He may just keep us from “heading to the light” later than sooner.  Mr. Peppers! 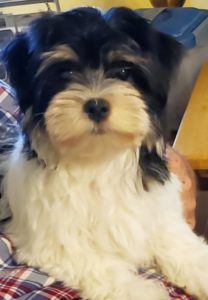