Mr. Peppers, our registered Havanese puppy is now almost 9 months old.  He has accomplished “playing the piano,” “rolling over” and listening to me “pray” for his food before eating. We also thought he had fully conquered the habit of going outside to relieve himself. 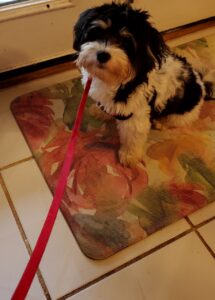 So, Mr. Peppers is leashed to me for intermittent prison today.  And many days hence if needed.  While Bill and I were at the kitchen table having our daily devotion, he was sitting at my feet leashed to the chair.  This made him terribly uncomfortable, until he realized that I was in control.  After one hour of this, he decided to come to me for a short time.  However, he is back to the leash for reminders.

I would say of Mr. Peppers.  You are ridiculously cute, highly intelligent, and at times very loveable, but as the Lord would say of backsliders…Repent!  Do your first good works again and be saved!

I had a talk with Mr. Peppers about his future and his wayward ways.  He looked at me dolefully.  Hopefully he will decide to be a “good doggie,” or alas, a prisoner of the leash.  You might want to say a prayer for Mr. Peppers.