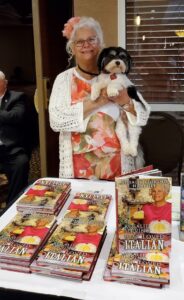 Mr. Peppers, our Havanese puppy, is now 15 months old.  As I have stated in previous updates, Mr. Peppers is quite the energetic puppy.  He is rarely still, except to nap occasionally during the day, and partially sleeping at night.  I say partially, because some nights he gets confused and wants to play or go in and out chasing squirrels.

However, his personality now includes entertainment.  This was found out when we decided to take Mr. Peppers to his first Cookbook Signing with me.  It was in Branson, MO., at the beautiful Chateau on the Lake Hotel during a Ladies Church Conference where I was blessed to have a table to display my Rosalie Serving Cookbooks.

We set his bed underneath the table along with food and water and explained to him that he was to be quiet and stay unnoticed while I offered and signed cookbooks to on-lookers.  This was truly a mistake!  I thought Mr. Peppers would eventually have to be kenneled up in our room, until tons of people gathered around my table, looking at a dog’s nose protruding out from a tablecloth.

Little children, moms, and hotel personnel, begged to see this black and white doggy with the motor tail and black nose.  So, reluctantly, I let Mr. Peppers come out and greet people.  There was no turning back!  The cookbooks sales soared as the buyers also got to pet and play with this little entertainer.

There was only one problem.  When everyone left the hallway to go into the church services, Mr. Peppers looked down the long hallway, and began to bark.  Bill, my husband, who stayed overlooking the table, decided he was looking for mote people to entertain.  This panned out to be true, because as soon as he had more folks to entertain, he was quiet and happy.  People were his concern!  Some even gave him treats to see him roll over and “give them five” with both paws slapping theirs.

So, the saga of Mr. Peppers continues.  Look for his next adventure on Rosalie’s Newsletter.  Also, check out my new recipe, Strawberry Deluxe Cream Cake.  Goodbye for now, Mr. Peppers.