“March Madness,” the term used to describe the excitement surrounding the Illinois state high school basketball tournaments, first appeared in print almost sixty years ago. It was coined by Henry V. Porter, who started his career as a teacher and coach at Athens High School in central Illinois.   Today there are over 350 teams that play in tournaments to win championship titles.  I think my husband would like to be the first one to have watched every tournament, since he is quite the sports advocate.

Not only does the term, “March Madness” scream out ‘college basketball,’ it is used for anything and everything in the month of March.  From car dealers advertising their best offers, to sales in home furnishings, including competitions of all sorts, even down to the best chef’s competing to offer their best gourmet dishes.  An advertisement on the KMOX, St. Louis radio station, encourages people from St. Louis, to vote on the best dish offered from our own St. Louis restaurant chefs, during the month of March.   I was just wondering, would anybody out there consider my Chicken Cacciatore?

Now, Chicken Cacciatore, is not a new dish to the Italian cuisine, and I wouldn’t even classify it as gourmet.  I would however say, it sure is one good dish!  You know, one of those old classics.  I just thought with all the March Madness going on, a quiet evening without any madness would be nice, especially sitting down to a great meal with family and friends.  And since this dish is simple and easy to make, you can have it on the table in no time.  No fuss, no muss…and who’s competing anyway! 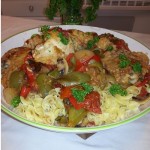