Even though Valentine’s Day has come and gone, I am still reveling in the gift that my husband, Bill, gave me.  I had heard an advertisement on the radio that Casablanca would playing at the Powell Symphony Hall in downtown St. Louis,  and that the awesome 50 something orchestra would be playing the musical score of the movie.  Bill also heard the ad, and immediately said, “Hey, honey…would you like to go?”  I didn’t even take a breath, and said “yes.”  It was last Sunday, February 16,that Bill and I made our way to downtown St. Louis to the beautiful Powell Symphony Hall.  This is the old St. Louis Theatre that was renovated in 1968 to house the St. Louis Symphony Orchestra.  It was some years ago when our Christian school visited the famous hall, but I must say, it was not a lasting memory.  Perhaps I was more concerned watching for the kids, then enjoying the orchestra.

This time the experience was breathtaking.  The grand staircases with the red carpet and inlaid gold bannisters were awesome.  The many, many chandeliers, amid the massive gold painted ceiling and the huge platform to accommodate the orchestra was truly an eyeful of artistic genius.  I quickly engaged one of the attendees and asked if she would take our picture on the staircase.  “Of course,” she said, and we were the object of many onlookers. .  We then found our seats which were on the first level and nicely located to view both orchestra and screen.   Although I had seen just bits and pieces of the famous screen play, I had never fully understood the movie.

The next three hour performance was a memory I will not soon forget.  I don’t know which I loved most, the movie or the melodious music that literally filled the massive auditorium.   It was truly a romantic experience and so befitting to be celebrated during the Valentine holiday.   My only hope is that all of you can go and experience all of it; the building, the atmosphere, and most of all the glorious orchestra.  Those of us who live in the St. Louis are so blessed to have one of the best symphonies of all time.   A true fact is that the St. Louis Symphony Orchestra is the second-oldest symphony orchestra in the United States, preceded only by the New York Philharmonic.   See you next year! 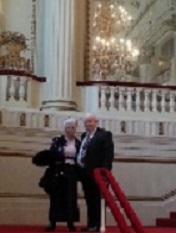